The Cloud Orchid Team woke up bright and early on Saturday, April 27, 2013.  Starbucks was grabbed.  Little Alice and Ophelia Darkly were double-fisting lattes and frappichinos.  While the event started late due to the event coordinator being grossly behind schedule, the crew was able to move forward into makeup and wardrobe.

The first set was a retake of a concept from 2012.  The “black, pink, and silver” concept was created and directed by Little Alice.  The crew was unable to accomplish this set the previous year due to sheer exhaustion.  It was revisited this year in even greater glory.  Originally, the models were supposed to have their chests painted with geometric shapes with black latex paint.  Due to the rules at OSR, this idea was scrapped and replaced with black ribbon.  This idea went over poorly in 2012, and was replaced with wings that Alice created herself.  They were glued to the models’ chests, decorated with chains, pearls, and gems.  Alice also made an entirely new hat for the pink ensemble, rather than using the Bubbles and Frown hat from the previous year.  Ophelia Darkly and Seth Nayes wore their Bubbles and Frown headpieces from the previous year.  Models Little Alice, Ophelia Darkly, and Seth Nayes were able to accomplish this amazing photo set, despite the paranormal activity.  After this set, Alice spent the entire day styling other models. 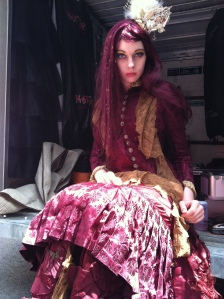 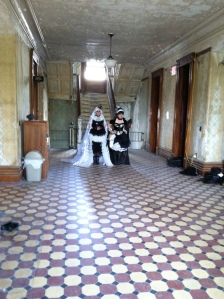 There were several photo sets scheduled with Graffiti Photographic, but there were also concepts planned with other members of the crew, such as Brett Stoddart of Tidy Photography, as well as friends of the crew.  These photos will be held and sent for publication in Cloud Orchid Magazine, L’art de Obscurité, and other magazines.

As always, the Cloud Orchid Team had a ghost walkabout with their friend, Scott Sukel.  Some intense supernatural activity was caught on tape.  This is not for the faint of heart:
WARNING: Disturbing Material- Ghost Walkabout Video

Follow our adventure on our Tumblr:
Cloud Orchid Magazine Tumblr