We are pleased to announce that Geisha Hands has officially been released!  Our co-editor Little Alice, aka Lauren A. R. Masterson, has been hard at work completing this incredible illustrated novel which includes 47 full colour illustrations!

Geisha Hands is available as a soft cover book on Lulu

Geisha Hands is available as an ebook on Amazon

This project was 5 years in the making – 3 solid years of working on the research and writing the manuscript, and 2 additional years of completing all illustrations.  The story was originally written as an in-class assignment in 2009 when Alice was in college.  You can read about the origins of this novel Here.  However, it was not until 2015 that Alice picked up the story again and began transforming it into a full historical fiction novel.

Co-editor Bryan Thompson of Graffiti Photography also played a big part in the creation of this novel.  Together, Bryan and Alice spent a total of 3 months perfecting the formatting for the novel to create an easy to read experience while delivering all the reference material for the more studious readers.  With Bryan’s guidance, the novel is now a streamlined reading experience that all levels of readers can enjoy.

Going forward, Alice is pleased to announce that there are more illustrated novels on her roster.  Next on the docket for Cloud Orchid Publishing to release is Alice’s second romance novel, Freja’s Baby.  This story takes place in the same “world” with the same character’s as Tearing Down the Wall.  However, this not not a sequel.  Freja’s Baby is a completely separate storyline where Freja endures a high school pregnancy, and Alex is the father.  Together, they must navigate the trials that come with emergency family planning and other challenges that test their love and trust for one another.  The release for Freja’s Baby is currently set for January 2020. 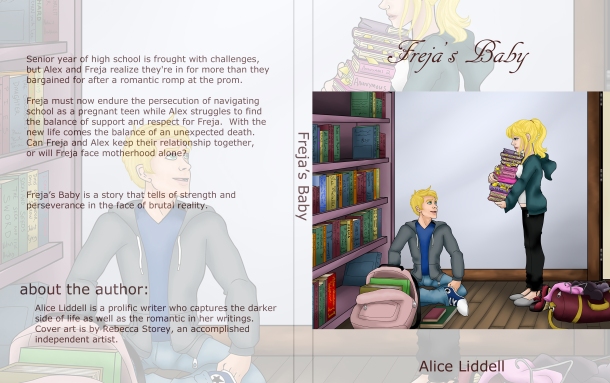