Now more than ever, it’s important to shed light on one of the darkest topics: mental illness.  Too often swept under the rug, and the people affected along with it.  Not long ago, America locked up its problem children and threw away the key.  These poor souls were trapped forever in their nightmares and tortured by misunderstanding and depraved indifference and experimentation.

Our crew had been to haunted places before, full of anger and violence.  But the overwhelming silence of this play belied the all-consuming despair that smothered the space like a heavy blanket.

The property had five buildings.  We started in the main building which featured patient artwork in the lobby hallway.  Looking over these painful images still gives us the chills.  Most were pleas to go home, or drawings of family members they missed.  Some were about why they were sent to the asylum, and how they felt they had paid their penance.  But one such series of drawings still haunts the crew members to this day.

Spirits began to make themselves known.  They were timid, and hesitant to approach us, polar opposite of what we had experienced years before at OSR.  Sadness clung to the spirits, even despite their attempts to be friendly; starved for human interaction.

Oni: Whispers in the Snuff Box is meant to give these abandoned souls the voice they deserve, to prove they are not entirely forgotten.  If we do not learn our history, we are doomed to repeat it.  The negligence in today’s society for the mentally ill is only a few shades away from slipping back to establishments such as TALA.

All the crew members have their own forms of darkness to contend with: depression, anxiety, compulsion, abandonment, abuse; it was as if those fragments of pain inside us were magnified a hundredfold in this place.  Staying focused and fighting against the creeping despair exhausted the crew by the end of the day.  Our own struggles, and by proxy the struggles of those passed, were captured in the art we created.

We spent the second half of the day in the Women’s Ward building, which had caught fire during the building’s history.  The faint echoes of pain were heard by the crew of the women who had not made it out in time.

A full account of the day is featured in on the official COM vlog along with sneak peeks of the photo projects that were done.

Exploring this dark space gave COM crew member Little Alice all the material she needed, bolstered with her own dark experiences with ineffectual mental health assistance.  She teetered on the precipice of madness and allowed all the old wounds to reopen in order to fully embody the pain that was suffered at asylums such as these.  The haunting prose in Oni only took a week and a half to complete, but seemed an eternity for Little Alice. 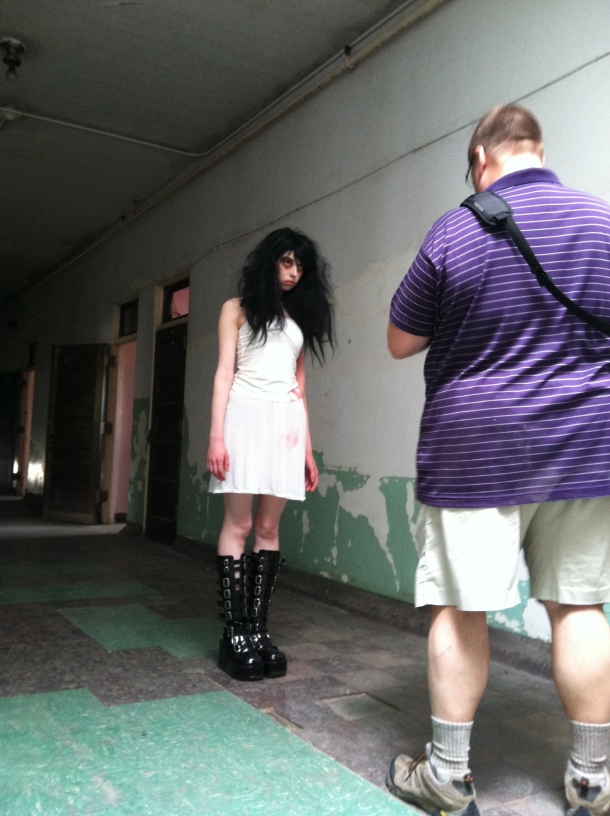 Models Ophelia Darkly and Seth Nayes (aka Madame Marvel) were especially chosen for the project, as they were the crew’s closest models who could deliver the caliber of empathy required.  Ophelia was a patient named Deidre, and Seth the nightmare that would visit her every night.  The design for Seth’s creature was inspired by Japanese oni and spirits.  The ensemble a collection of red ribbons of varying sizes to create the bizarre likeness of dripping blood.

It was not difficult for Ophelia to play the part of a tormented patient, as Seth embodied the role completely.  Ophelia went to dark corners of her own mind and pulled out all the suffering and emptiness she herself possessed.  The duo was perfection in creating the photo narrative to bring the anguish of the asylum to life.

Oni: Whispers in the Snuff Box is a visceral account sure make the reader begin to question their own hold on reality.  Read on if you dare.

Voice Over with Kevin R. Czarnecki