The Trans-Allegheny Lunatic Asylum is a massive sprawl of five buildings on over three hundred acres of land.  The crew only had access to two of the buildings, the main building and the women’s ward.  These buildings are so massive that we were only able to scratch the surface of this incredible location.

The asylum was built in the mid 1800s and was capable of supporting 250 mental patients.  The small town found this facility to be their main bloodline to their economy, and abused it.  By the time this place was shut down in 1994, the conditions were horrific.  The overcrowded buildings housed over 2,500 patients, many of which should never have been admitted.  The patients were experimented on, and even raped by the doctors.  There was a children’s wing for mentally ill children, as well as the bastard children.  Many of the patients often committed suicide, or killed one another.  There were escapees nearly every night, and some even killed doctors, nurses, and townspeople. 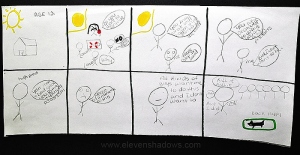 While the paranormal activity that the Cloud Orchid Team experiences at OSR is often violent and frightening, here is was sad and mostly docile.  It was strange for Ophelia Darkly and Little Alice, who are used to being attacked, were instead visited by playful ghosts, and spirits who merely wanted comfort.  The girls were only too happy to oblige, finding the new experience fascinating.

The first photo set that the Cloud Orchid Team accomplished was the “Nightmare Demon/Oni” set.  This was styled and directed by Little Alice, and photographed and directed by Graffiti Photographic.  Seth Nayes was styled to be the oni (a Japanese ghost), and Ophelia Darkly was styled to be an injured mental patient.  The idea behind this concept was that Ophelia Darkly was a grungy, neglected insane patient who is tormented by her nightmarish imagination.  A lot of the aspects of this concept and stylized and symbolic, but they look wicked cool on film too!

While the team worked, Little Alice had to juggled directing and prepping Seth Nayes for his next photo set.  This involved scrubbing his full face makeup, as well as escorting him down the stairs since geta (Japanese shoes) are not the safest for traversing several flights of stairs.  This, unfortunately, left Little Alice to go from the break room back up to the shoot location alone.  One of the major rules in haunted buildings is that Little Alice is not allowed to be left alone (due to her vulnerability).  Sure enough, this was the one and only incident during the day where Little Alice was attacked.  A strange entity chased her from the children’s wing, up to the third floor.  When Little Alice reached Ophelia Darkly and Graffiti Photographic, the entity stopped chasing her, and departed.  After this, the only incidents that were had were a group of ghosts mocking Little Alice when she had to scrub Ophelia Darkly’s feet before putting her shoes on.  They taunted her, calling her “Jesus.”  The girls took it in stride, knowing that the ghosts really meant no harm.

After the set was completed, Ophelia Darkly also headed back to the break room for her next photo set.  Little Alice stayed behind with Graffiti Photographic and assisted with quickly photographic Miss Spooky/Silversark in one of her magnificent designs.  This was a short set, and the group returned back to the break room.  Overall, the entire crew was able to accomplish several photo sets that day.  Already exhausted from several days of non-stop shooting and driving, they gave it their all.

The staff required an hour break for lunch, which meant that the crew had to leave the building during that time.  After the break, the crew started shooting at the second building, and were not allowed to continue shooting in the main building.  The real fun began here.  Brett Stoddart of Tidy Photography brought his antique wheelchair, and allowed several of the crew to utilize it, whether for photos or just scooting around for fun.  Brett was the head coordinator for the group shoot at the asylum, which the Cloud Orchid Team was tremendously grateful for.  This location is an amazing find, and we owe Brett a lot for making the day happen.

Graffiti Photographic found a beautiful section of greenery behind the women’s ward, and photographed Miss Spooky/Silversark in a frothy, pink, Sweet Lolita ensemble.  A design of her own, complete with a white birdcage chapeau by Deborah Olson of Milliner Extraordinaire.  After their brief set, Graffiti Photographic shot Little Alice’s final idea.  She also wanted to be an “oni,” but this one was more elegant, and fit perfectly with the beautiful green canopy of trees and ivy.  Her ensemble included real brocade silk kimono and an obi, which were difficult to protect from the crumbling asylum.  She managed and “danced” gracefully before Graffiti Photographic’s camera.

The group was sad, but fulfilled when the staff came to announce that shoot time was over, and that they needed to lock the buildings up.  It was the end of an incredible trip, which the group had already started planning and speculating for 2014 while shooting.  The crew plans to expand further for next year, including more models, photographers, and designer contributions.  OSR is still on the menu, though this will be coordinated through Graffiti Photographic and not the usual photo group shoot.  TALA will be extended into a two day event, and the West Virginia Penitentiary will be added to the locations.  The 2013 journey was a whopping six days, which might make the 2014 journey extend past even a week!  Whatever we plan, the Cloud Orchid Team will find new ways to delight, confuse, and awe their audience (and even themselves).