Seth Nayes, aka “Madame Envy” is a controversial person in the fashion industry.  There have been many stories about Seth that illustrate that while the industry happily embraces his special flair, society at large generally doesn’t.

For those who are confused- Seth is a biological man who is homosexual, and enjoys dressing and acting like a woman.  Though sometimes, he dresses like a man, or does other things that make people unsure of what exactly he “is,” and what he’s “about.” 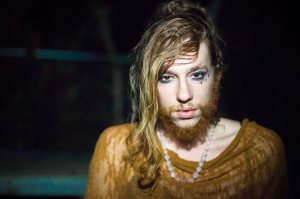 The best way to describe him is through the lens of co-editor, Little Alice, and her glitter and pony filled world: “Seth is a mythical creature.  More of a nymph or faerie, than a person.  He brings joy and beauty everywhere he goes.  Who or “what” he is, is totally irrelevant to what he does.”

These qualities are what make Seth such an amazing person, but they are also the driving force in why he attracts so much negativity, and controversy.  To begin with, Seth is homosexual.  There is a large percentage of people who go out of their way to blindly hate and ridicule anyone who is openly gay.

In the past, Seth has had to deal with the burden of his sexuality.  Through bullying in school, being beat up, and even recently he was egged in downtown Madison.

Despite this, Seth refuses to hide himself, or conform to what greater society deems “acceptable.”  Instead, he flaunts it all the more.  Seth’s refusal to deny himself is an inspiration to many.  Seth frequently receives emails from homosexuals, and people who are just different, saying how glad they are that someone like Seth lights their way, and encourages them to be brave enough to be true to themselves.

Outside of Seth’s homosexuality, and overall fabulousness, his art also creates waves.  Because Seth is a man, artists and photographers love to use him for bolder pieces because it’s not illegal for him to be topless in public.  However, because he is still a man in a dress, this can invite even bigger flames.

In 2012, Seth joined the Cloud Orchid crew on the caravan trip to Mansfield, OH.  Part of this trip was to have a photo shoot on a carousel for one of the in-house editorials.  The shooting went fine, until the other patrons found out that Seth was actually a man dressed as a woman.  The masses threw the crew out, sans torches and pitchforks.  Such incidents as these are reminders that while the art community may think nothing of putting a man in a dress, and photographing him on a carousel, some people find it outrageously terrible and inappropriate. 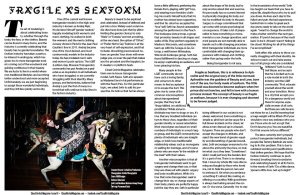 Which brings us to a controversy that keeps rearing its ugly head, and reminds us that society still has a long way to go before it can call itself “civilized.”

During the same 2012 caravan trip, Seth worked with Karen Jerzyk Photography at OSR.  She took full advantage of Seth being legally topless, and did many artistic sets with him.  Photos from this day have been removed by Facebook several times under the grounds of “pornography.”  These artistic images do not feature genitalia, nor any sexual themes.  Seth has tried to argue with Facebook on the grounds that he is a topless man, and not a woman, but they refuse to budge.  This is one of the photos from that day:

True to his big heart, and desire for equality, Seth was more concerned with the idea that woman cannot be topless, but men can.  He thinks that this kind of inequality is unfair and disrespectful.  Seth will continue to share his art publicly, and is not afraid of backlash.

The fans love Seth, and follow his adventures, because he is always purely himself.  He does not follow any gender roles, stereotypes, or “rules” that society sets for him.  Seth challenges modern society, and our notions of what is “proper.”  He does this through his art and his kind gestures toward those who love him.  Seth is truly a shining example of what it means to be yourself, and to treat others as you would like to be treated.

3 thoughts on “Seth Nayes (Madame Envy) A Subject of Controversy”